by Jason on January 31, 2021 in Galleries, InProfile Features

Giving you something a bit different from our normal features, is Sam Styles’ – 1963 Chevrolet C10 Short Bed Truck.

To be honest, we should have been doing this along time ago, with so many other cool rides out there – rides like Sam Styles’ fantastic imported Southern Californian Chevrolet C10 short bed truck, this first generation chevy pickup truck which  was launched in the fall of 1960 and produced until 1966. 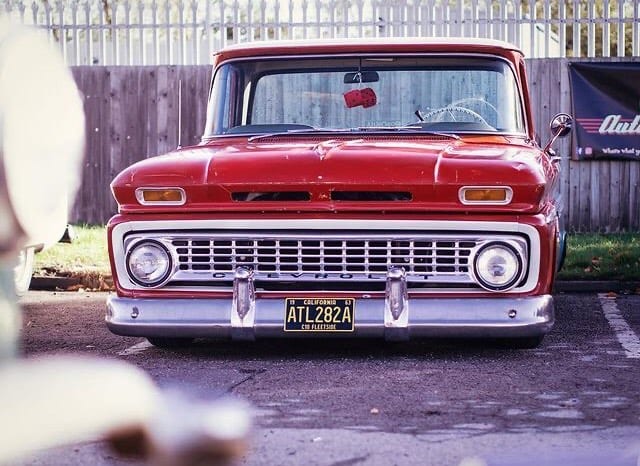 Which would give out some crazy beef, around severn hundred to 800 bhp mark, then would change to 3 speed auto transmission, plus build a ford 9″ rear axle.

Classic interior, perfect colour combo, original radio along with it’s patina really makes this truck, the 1963 Chevy had a one year only grill, with the last of the wrap around window screens.

They gained the nick name of the ‘Knee Knocker’ because of the amount of people that smashed their knee’s on the A pillar.

Sam’s half ton truck has ‘air suspension’ and will also getting treated to some chassis strengthening along with some chassis mods will get Sam’s chevy sitting on the deck.

Sam and truck really get full attention where ever he go’s and it’s well deserved as you can see, with his big plan’s lined up, including a visit to the ‘Rothfink Lockup’.

We really can’t wait to see you and your rad ride Sam, cheers and all the best dude. RF

Special thanks to the photographers below letting us use there images: